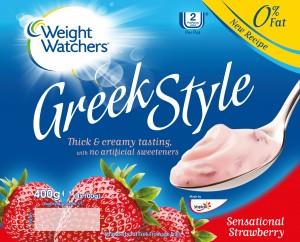 After we had created the previous packaging design of Yoplait’s ‘Greek Style’ yoghurts (also producing print ads to promote this product in the Weight Watchers magazine) we were contacted again in 2013 to take on another redesign. Yoplait were looking to update the packaging and introduce a more stand­out style to the range by simplifying the elements of the design and readdressing the balance of brand vs. product. They wanted to present the ‘Greek Style’ yoghurt line almost as a brand in its own right with its own individual identity.

We developed packaging that was clean and simple with a vibrant blue background to create a contrast with the bright sunburst Weight Watchers logo. We felt this complimented the ‘Greek Style’ brand/product as the combination of the rich blue sky background, sunshine logo and fresh ingredients invited associations with the Mediterranean and a healthy lifestyle. The product title was moved out from the underneath logo and enlarged, using clear, modern typography.

In 2014, Yoplait approached us again to redesign the rest of their Weight Watchers range (including desserts and fromage frais) following the overwhelming increase in sales of the ‘Greek Style’ product line. The design was so successful that Weight Watchers then asked us to create the latest packaging guidelines for all licensees under their brand, which were published and distributed at the end of last year. Collective Creative has worked with Yoplait since 2008. Outside of the Weight Watchers licence, we have worked on several other ranges under the Yoplait brand including Petits Filous, Cal­in+ and Yop.